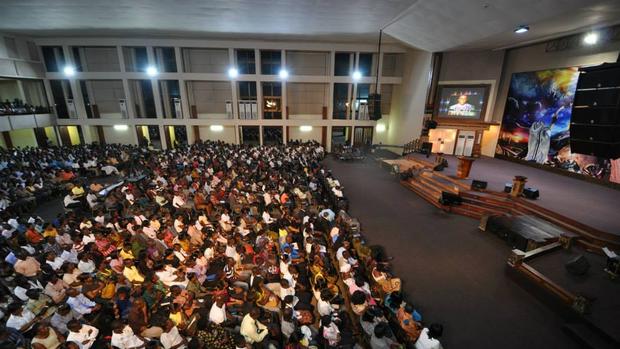 a mechanical workshop and a cinema theatre. In May 1986, the church settled in a rented scout hall – the Baden Powell Memorial Hall – which became its home for the next ten years. This hall was renovated to enable it accommodate the fast-growing membership of the church. During this ten-year period the membership rose to over 4,000. This period also saw aggressive missionary church planting activities with local assemblies established in almost all the major towns and cities of Ghana. Several other churches were also planted in cities in Europe and the United States.

The first congregation which was established in February 1984, now designated as the Christ Temple assembly, has directly planted about forty other churches out of the original congregation in the Accra - Tema metropolis of Ghana alone. In 1988 the ICGC established a ministerial institute to train a new generation of leaders to carry out its vision. From the initial six-month certificate in ministry, the college has developed into the premier private-owned University in Ghana known as the Central University College.

The International Central Gospel Church is a socially conscious Christian church which upholds the philosophy of Human dignity and Excellence. It engages in promoting and staging events whose impact have reached to the depths of the Ghanaian society and brought Christ to the doorsteps of the people.

is an Evangelical, Charismatic Christian Church. It was officially inaugurated as a church on the February 26th, 1984, in Accra, Ghana. The first meeting was held in a small classroom with an initial membership of just about twenty people.

February 1984 to April 1986, the membership grew to about one hundred and eighty (180) adults in regular attendance. ​The early meetings of the church were held in several facilities which included classrooms, a private residence,a public hall, a science laboratory,